Building on the bionic approaches of some of our developments, IngB RT&S has succeeded in not only modulating the first layers of the retina, but also replicating their basic functionality. This makes it possible - as for example by humans - not only to capture "neuronal based" visual sceneries, but also to recognize contours and / or reflect colors as they are perceived by humans during the day and at night, irrespective of the level of illumination.

Questions such as "Why do I recognize a white truck in front of a white sky, but not my computer-based image processing software?" or "How can I constantly detect and track in halls with constantly bright light through my autonomous robot contours even at a distance?" could now be finally solved by our approach.

Of course, we did not just put the bionic filter through its paces last year, but also put it into new applications together with our partner companies. The two most interesting are likely to be the avoidance of human-machine collisions in any factory and under (rapidly) changing lighting conditions as well as the tracking of objects in any environmental conditions - both applications, which make light grids and / or safety fences unnecessary.

Its  important to mention, that  we not  using any templates to detect any contours or other "pre-cognitive methods" for object segmentation,  only methods of the retinal picture analysis. How powerful these methods are can be seen right hand side. Changing one parameter of the retinal filter  leads to an  objectification of the car to be detected. 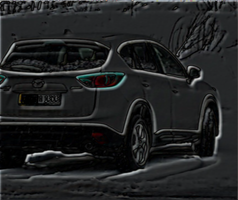 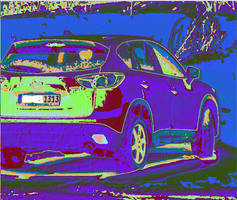 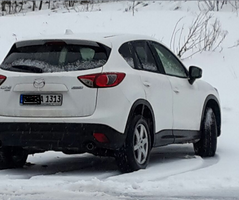