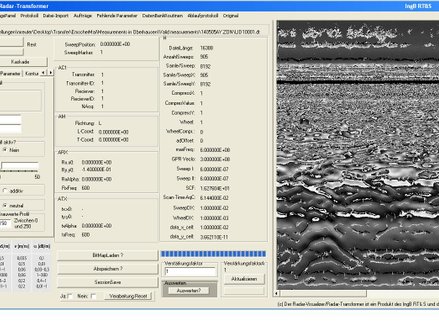 The analysis of soil substrates using non-invasive techniques such as magnetic and electric method has a long tradition, but succeeded only in recent years to advances even in geologically rather uncooperative soils in greater depths  thanks to new lighting methods.

However, still applies: as further one looks into the soil, the weaker the still evaluable information components are. For this task special algorithmen has to be created,  which can visualize relevant information despite an unfavorable S / N ratios on the one hand and on the other hand give a first indication on if and where object-specific signatures appear.

Our special software is designed for different data formats, so most common  ground radar signatures can be analyzed.

With help of a  special module line structures  can be summarized with reference to several radargrams and visualized in a quasi 3-D display.